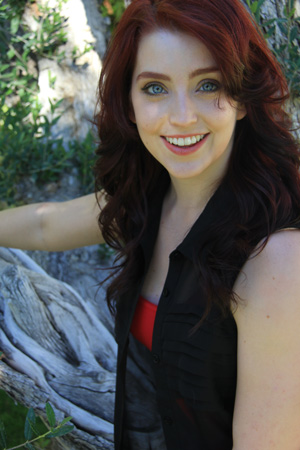 Brittany Halen is a vocalist, dancer, actress, actor-musician, and choreographer based out of Houston Texas. Born into a musical family, she started playing the violin at age 6 under the instruction of her father, Eric Halen, and Grandfather, Dr. Walter Halen. At age 7, she found her way into a pair of tap shoes at Becky’s School of Dance. Finally, she found her love of musical theater through Theatre Under the Stars Humphreys School of Musical Theater where she was a student throughout high school. During this time, she also studied voice privately with the renowned vocalist Patti Spain.

She recently appeared as Sally Smith in Me and My Girl, and as Josie Cohan in George M! with
Theatrezone in Naples, Florida. In Houston, Texas, she has performed as live music and sound in Around the World in 80 Days at The Alley Theatre, and as a vocal soloist with the Houston Symphony in a tribute performance to Marvin Hamlisch. Brittany has also appeared as a vocal soloist with Musica Tra Amici in An American Music Celebration; featuring music by William Bolcom and Cole Porter, and Music and Songs by Gershwin and Copland. She has also appeared in numerous productions in Houston theaters including The Rocky Horror Show, Reefer Madness, Yankee Doodle Dandy, Avenue Zoo, White Christmas, Guys and Dolls, Scrooge, and Urban Cowboy with Theatre Under the Stars, Mack and Mabel and Failure; A Love Story with Stages Repertory Theater, and A Civil War Christmas, Madeline’s Christmas, and The Musical Adventures of Flat Stanley with Mainstreet Theater. Brittany also frequently works and performs with the renowned J&;D Entertainment in Houston, Texas.

As a Choreographer, Brittany has choreographed James and the Giant Peach for Theater Under The
Stars, as well as 1776, Rock of Ages; High School Edition, The Addams Family, Aida, Sympathy Jones, We Will Rock You, and Footloose for Stageworks Theater.

As an educator, Brittany is a teaching artist with the Humphreys School of Musical Theater’s Academy and Outreach programs. She has previously worked with Theater Under The Stars – The River, where she teaches musical theater classes to children with disabilities. She is also an instructor for Stageworks Theatre, and has previously taught with HITS Theatre in the Heights.

Brittany holds a Bachelor of Fine Arts in Musical Theater with a concentration in Dance from Sam Houston State University, and is a member of Actors Equity Association.