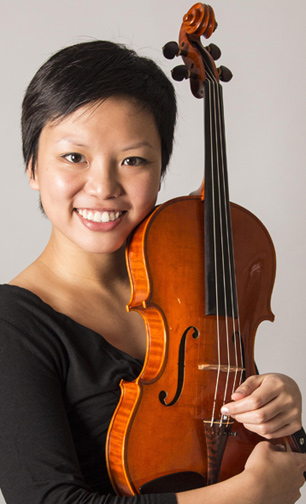 Jarita Ng joined the Houston Symphony in 2015. A versatile violist, she has appeared in chamber and solo performances across United States, Europe and Asia. Her love for traveling and meeting people and musicians has brought her to various music festivals in Europe in the summer, such as Verbier Music Festival in Switzerland, and Festival Pablo Casals in France. Among the conductors with whom she has worked are Valery Gergiev, Charles Dutoit, Zubin Mehta, Esa-Pekka Salonen, Manfred Honeck, Michael-Tilson Thomas, Christoph Eschenbach, and Semyon Bychkov.

Her enthusiasm in new music has led her to collaborate with renowned living composers, including John Adams, Bernard Rands, Gunther Schuller, Paul Schoenfeld, among others. In addition, she has been an advocate for music by student composers – she has commissioned, performed, and recorded more than 10 solo and chamber music pieces. One of the compositions and recordings, “Exit, Pursued by a Bear” for solo viola by University of Michigan doctoral program graduate Matthew Browne, was awarded first prize at the Gardner Composition Competition held by the American Viola Society. Jarita was invited to present the piece at the Primrose Festival in Los Angelos.

Jarita holds a Master of Music degree from Rice University under the tutelage of James Dunham; degrees in Bachelor of Music studying with Yizhak Schotten and Rebecca Albers, and Bachelor of Science (biology) from University of Michigan. She was a pre-veterinary science student then, hoping to work with horses one day. To compensate for the lack of animals in her life now, she adopted a stray dog from Hurricane Harvey. She named the dog “Smudge,” because of the eyeliners around her eyes.