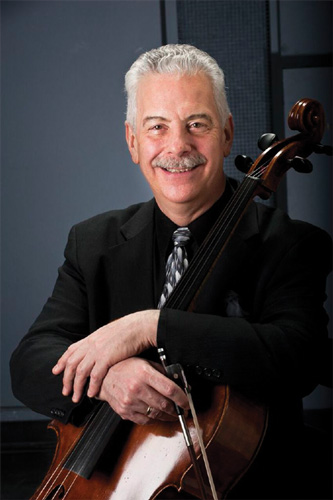 Mr. Fischer is the cellist with the Fischer Duo, a group with pianist Jeanne Kierman that was founded in 1971 and specializes in both the classical masterworks of Beethoven, Brahms and Schumann as well as music of our own time. They have over a dozen recordings. Most notable are: Imaginées: Music of French Masters, American Music in the 1990s, Complete Music for Cello and Piano of Chopin and Liszt, and Complete Cello Music of William Bolcom. The most recent album is Beethoven Cello and Piano Complete on the Centaur label that is the most comprehensive collection of Beethoven’s music for the two instruments. The Duo has premiered over 30 new scores by composers such as George Rochberg, Augusta Read Thomas, Robert Sirota, Pierre Jalbert, and Richard Wilson. They continue to actively perform throughout the United States and twice have served as Artistic Ambassadors for the USIA with tours to South America and South Africa.

Mr. Fischer continues to be committed to music for solo cello. His 1983 New York solo debut of the Bach Six Suites in one evening was hailed by New York Times critic John Rockwell as "inspiring". During the 1994 season, Mr. Fischer's recording of William Bolcom's unaccompanied cello score was featured on Broadway as incidental music for Arthur Miller's most recent play, Broken Glass. Mr. Fischer was honored by being invited to open the 1995 Tanglewood Music Center season with a performance of Henri Dutilleux's Trois Strophes sur le nom Sacher, and during the 1996 Tanglewood season was similarly honored in presenting the world premiere of Mr. Bolcom's Suite in C Minor He has performed the standard concerto classics with conductors such as Lukas Foss, Robert Spano, Larry Rachleff and Efrain Guigui. He has also championed new works for the genre, such as the Robert Sirota Cello Concerto (Tanglewood 1985), the Augusta Read Thomas Vigil (Cleveland Chamber Symphony, recorded on the GM label), Steven Stucky Voyages (recorded for Opus One in 1991), and Ross Lee Finney's Narrative (with the Cleveland Chamber Symphony, recorded for New World Records).

Mr. Fischer is currently Herbert S. Autrey Professor of Cello and Director of Chamber Music at the Shepherd School of Music at Rice University in Houston. Before accepting this position in 1992 he held positions at Dartmouth College and the Oberlin Conservatory of Music. Mr. Fischer also holds the Charles E. Culpepper Foundation Master Teacher Chair at the Tanglewood Music Center, where he has been on the summer faculty since 1985. He is currently on the board of directors of Chamber Music America.