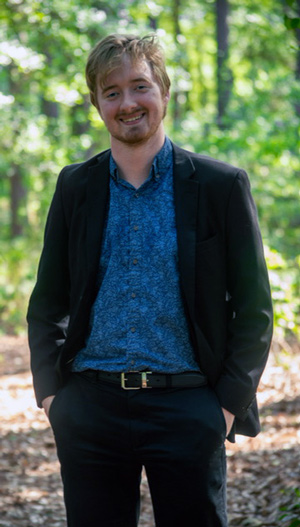 Sean Holshouser, age 19, has already had numerous and varied performance opportunities; both as a vocal soloist and an actor. With the Houston Symphony, he performed over ten times as a boy soprano soloist. He participated in the 2010 Open House concert, sang the solo, "Walking in the Air" with a screening of the short ﬁlm The Snowman, and performed as a soloist for the many Christmas Pops concerts for 2010. One of his most memorable experiences was singing the boy soprano solo "In Dreams" at the end of a screening of the movie "The Lord of the Rings: The Fellowship of the Ring", featuring Howard Shore's leading concert performers, soprano Kaitlyn Lusk and conductor Ludwig Wicki; they were joined by the Houston Symphony, the Houston Symphony Chorus, and the Houston Children's Chorus.

Sean sang at a national AMSOV meeting (a convention of American symphony leagues), and has performed short concerts for both the Bay Area Symphony League and the Houston Symphony League. He played the comic role of "Harry" in a University of Houston Moore's School of Music Opera production of Benjamin Britten's Albert Herring, and participated in the Houston Grand Opera production of "Peter Grimes". He auditioned and won the role of Amahl in "Amahl and the Night Visitors", before having to back out due to his voice change. After the change was completed, he was asked by Donald Runnicles, music director of the Berlin Opera (formerly music director of the San Francisco Opera), to sing a program of Copland songs to open a concert at the prestigious Grand Teton Music Festival, which he did in August 2013. He was a member of the St. Pauls’ Choral Scholars for three years, and was formerly the youngest official member (as well as the only minor) of the Houston Symphony Chorus. He recently began his second year as a member of Houston Grand Opera’s Bauer Family High School Vocal Studio, finishing the year having won the Encouragement Award at the end-of-year recital, as well as having performed in the Houston Grand Opera Studio Showcase (the only guest-artist), and in the world premiere of the new opera The House Without a Christmas Tree. He has also performed in two of Eric Halen and Gaylynn Thomas' “Musica Tra Amici” concerts in October of 2016 and 2017, and has had two appearances in the programs of Scott Cutler’s Woodlands Salon Series concerts.

As a theatre performer, Sean has been associated with HITS Theatre in Houston for several years, where he has played roles in shows ranging from Shakespearean to musical theatre. His most notable roles include parts in Godspell (Jesus), Anything Goes (Billy Crocker), Into the Woods (The Baker), Zombie Prom (Jonny Warner), Sideshow (Terry Connor), and Crazy For You at Miller Outdoor Theatre (Bobby Child). Sean also played the roles of Scrooge at 14 and Peter Cratchit in the Alley Theatre's production of A Christmas Carol. In affiliation with the Alley and the Museum of Fine Arts Houston, he was part of the inaugural performance of the Bayou Bend “Christmas Village,” which received extensive support and media advertisement in Houston; he returned for a second year in 2016. Sean is also an auditioned member of the Broadway Artist's Alliance. In March of 2014, he won the ﬁrst place $1,000 scholarship in vocal arts for Music Doing Good, a Houston-based scholarship program for aspiring musicians aged 18 and under; he received the same award in the 2015, 2016 and 2017 seasons of the same program. Within the last two years, he was seen in Theatre Under the Stars’ production of Scrooge, as Ebenezer Scrooge, for their Musicals for Young Audiences series, as well as in HITS Theatre’s production of Footloose at Miller Outdoor Theatre (Reverend Shaw Moore). In November of 2016, he opened the NCAA Men’s Soccer College Cup at BBVA Compass Stadium with “The Star Spangled Banner”. He performed the same piece again for a combined audience of over 37,000 at Miller Outdoor Theatre and Mitchell Pavilion to open the Houston Symphony’s “Star Spangled Salute” concert series in 2017.

Sean has quite a large following on YouTube, with over 2,300 subscribers; most notably, his recording of "In Dreams" is one of the more popular on the site, with over 160,000 views.

Sean's two main theatre teachers are Hector Vasquez (voice), an affiliate artist at the University of Houston, and Todd Waite (acting), a repertory cast member of the Alley Theatre company.